IF International Connects With Turkey 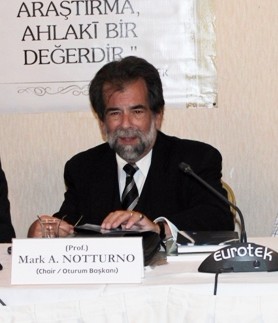 IF Fellow Mark Notturno returned to Turkey last September to speak at Turkey’s Research Institute for Philosophical Foundation of Discipline’s International Symposium on ‘Karl Popper and the Problem of Change in Science, Society, the State and Faith’ in Ankara. Notturno, who is a world authority on the philosophy of Sir Karl Popper, spoke to the conference about Popper’s ‘moral credo’: “I may be wrong and you may be right, and by an effort, we may get nearer to the truth,” which he described as the spirit underlying the Interactivity Foundation’s public policy discussions. He was later interviewed about the same topic on Turkish Television. This was Notturno’s second visit to Turkey to talk about Popper’s philosophy in as many years. Back in Washington, Notturno is ready to begin his eleventh IF project on ‘The Future of Free Speech’. But he will travel to South America in August, where he will give a keynote address at the Bases Foundation’s Sixth International Conference on Austrian Economics in Rosario, Argentina; facilitate discussions about his IF report on Money, Credit, and Debt in Rosario and Buenos Aires; and give talks about Popper’s theory of democracy at Valparaiso University in Chile.